Congenital adrenal hyperplasia (CAH) is a medical disease and is usually managed with lifelong medications. However, some patients with CAH have problems in their perineum which may need surgeries for its correction.

It is a genetic condition that affects the adrenal glands of the body and affects all the hormones produced by it. Because of this problem in hormones, these children need hormones from the mouth. It can occur in both males and females, however, it is mostly present in female patients.

These patients can present at any age. Most of the times, these patients are diagnosed immediately after birth and because of this deficiency of hormones, they start having vomiting, lethargy, dehydration, and problems in feeding. At the same time, they have a mixed appearance of the genitalia and by looking all of these features, doctors may suspect the disease.

The doctor will advise some blood tests and then an ultrasound. Usually, we also get a test call Karyotyping, which allows us to see whether the child is male or female genetically. Then further hormonal levels are obtained.

It is a treatable cause and the patient needs a lifelong medication. So, there is a medical treatment and a surgical treatment. Both of these are necessary and need to be done.

Why do patients with Congenital Adrenal Hyperplasia need surgery?

Before going into details of the surgery, one very important thing to understand is that these patients are purely female patients who are genetically females, have female organs including ovaries and uterus, but due to hormonal effects, externally they have a look like males. So, when we talk about correcting their external appearance, we are not actually converting them from male to female, rather we are making them a true female from a female who erroneously had a male-like appearance. 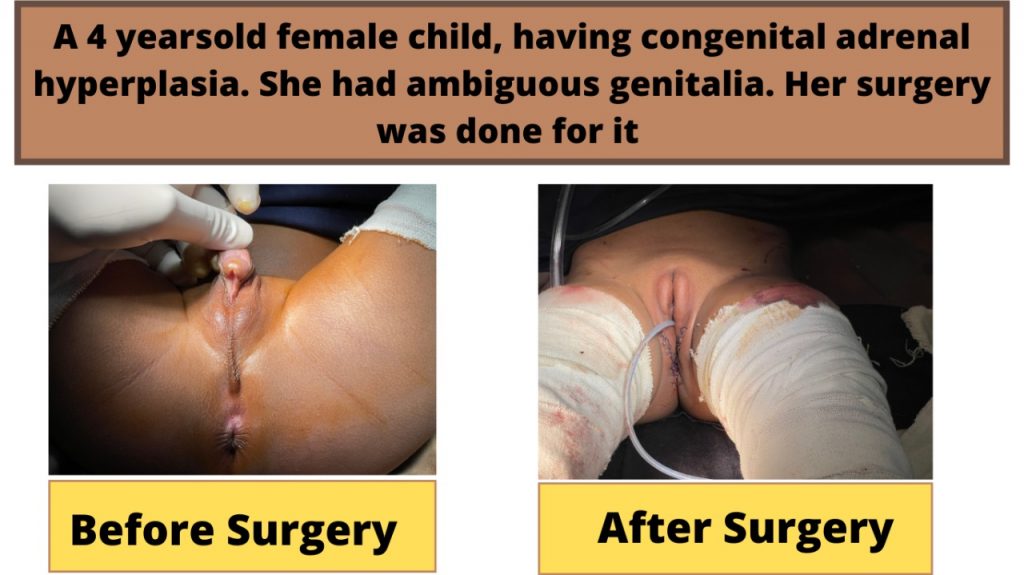 The problem with the external look of these patients is that they may have a combination of all of these with varying severity:

At what age, surgery for gender dysphoria can be performed?

In females with CAH, who have a uterus and ovaries, this surgery can be performed at any age. If a child presents to us at early age, we prefer to do it at one year of age. This is somewhat controversial, as in many European countries, this surgery is delayed till 18 years of age. However, our group strongly believes that European guidelines may not be applicable socially to our own society. Our society has its own norms which do not accept to delay this surgery. Therefore, we recommend to fi this surgery as early as possible so as to prevent the child from gender dysphoria.

After surgery, will these girls be like normal girls on appearance?

Answer is yes. It all depends what structures she is born with and how she had been handled previously. We get a lot of patients who have been operated previously by inexperienced surgeon and patients come to us for corrective surgery. Sometimes, they have been so much worse condition, that we refuse to do anything.

Luckily, most of the patients come to us without any prior surgery. If she has a vagina, ovaries, uterus, and other female structures, we almost always say that we can make her a functional female. The appearance score will be good and very much acceptable.

Yes, this surgery is very much complicated. It needs a team-based approach including surgeon, pediatrician, pediatric endocrinologist, pediatric anesthetist, pain management team, pediatric nurse, physiotherapist, and psychiatrist. Each individual is assessed individually and plan for each patient differently.

Can she bear child?

Yes, these patients must be able to have children, if she has a normally functioning uterus and ovaries. We can guide the parents about this issue after getting an Ultrasound and after doing laparoscopy.

Can she have a normal sexual life later on?

What if we do not go for surgery?

It all depends upon what is the look of child, and how many structures and problems she has gotten. On the worst scenario, if she had vagina and other female structures which are hidden in her body, she will suffer a gender dysphoria after puberty. She will start having normal menses and periods at the age of puberty. And if she has not been operated yet, she will have severe pain in abdomen which may lead to infection and other problems. She will start behaving like a female and will start having breast development under influence of hormones. This usually causes a lot of disturbance to the children, who are being raised as males till not. At this point, they start having female thoughts and their parents start pushing them to be like a “man”. This causes conflicts and a lot many psychological issues. Many children run away from their homes at this stage and then they start having a lot many troubles.

Therefore, we very strongly recommend children to have examined and address their needs beforehand.

Do these children need a lifetime medication?

Yes, usuallythese children need Hydrocortisone and sometime Fludrocortisone too. These two mediations are lifetime and they can’t skip its does. Also, sometimes, they need hormonal replacement therapy which is started by pediatric endocrinologist as per need,

The secondary characters of a female like voice, breast development and other sexual characters are under the influence of the hormones produced by ovaries and uterus. So, if they have a normal function ovary, they must have a normal growth like any other female. Sometimes, these children do not a have a normal ovary, so they may need hormones from outside so they they may have normal female like growth.

What is a trans-woman/ gender dysphoria?

In general terms, a transwoman is a woman which was assigned male gender at birth. Transwoman have a female gender identity, may experience gender dysphoria and may transition, this process commonly includes hormonal replacement therapy and sometimes sex reassignment surgery, which can bring relief and resolve feeling of gender dysphoria.